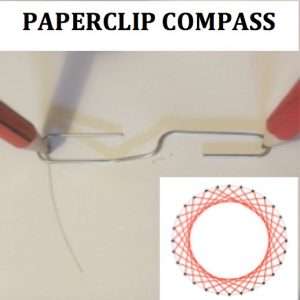 The picture shows you how to use a paper clip to draw circles. You just need to open out the paper clip as shown,

The inner circle that you see is called the ENVELOPE to the family of straight lines you have drawn. The lines are tangents to the envelope curve. Call this envelope n=24, s=5..

Experiment with different numbers of points around a circle, always joining points with straight lines and counting the same number of points between them.

What pattern would you get if you joined every 8th point on the 24 point circle?

The envelope shown above is  named n=28, s = 7 . It is formed by marking 28 points around a circle and joining each point to the 7th point around the circle, missing 6 points between them. This is more difficult to draw accurately because the angle required is 360/28 = 12.86o (to 2 decimal places).