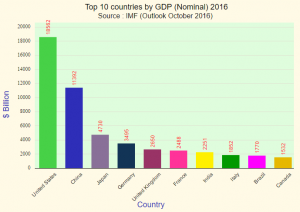 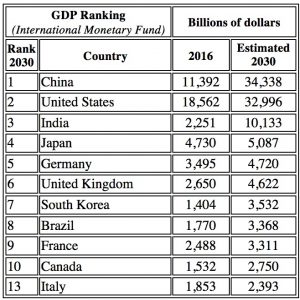 The graph and table show the Gross Domestic Products (GDP) of the world’s top ten economies in 2016 and the forecast for 2030.

Draw a double bar chart to compare the GDPs for these eleven countries in 2016 and 2030 (forecast).

Which countries are in the top ten in one of these years and not in the other? By how much does the GDP change for these countries between these two figures?

Which country makes the biggest increase in GDP? By how much does their GDP change?

Write down some of the things you notice from the data and some of the questions you might ask about what it shows. You might like to comment on how it is that the amount of money appears to increase so much for all these countries in the 14 years. Is the world getting richer and richer? How do you think the rest of the world might be affected by these figures?