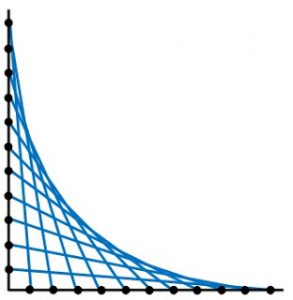 These straight lines form a family and the curves that you see, called envelopes, are tangent to each line in the family.

Experiment with different angles between the base lines, also using several pairs of base lines in the same diagram and using different colours.

Similar envelope patterns can be drawn by marking points equidistant around a circle. The envelope shown has N=28 points around the circle. It is drawn using the rule n \to n + 7 by joining each point to the 7th point around the circle, missing 6 points between them where n = 1, …, N.

a. Draw 2 circles with equal radii, intersecting at C, so that each goes through the centre of the other.

b. Draw a third circle of the same radius with centre C.

c. Draw 4 more circles with centres on the circle centre C and passing through A.

Experiment with this basic construction and also by drawing only the arcs of the 6 outer circles that lie inside the circle centre A.

This design is a clever combination of the methods used in parts 1 and 2. 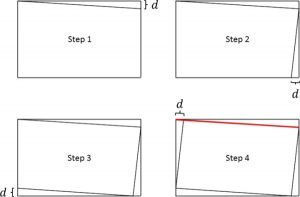 b. Repeat this construction drawing straight lines spiralling inwards, marking the distance d along the next straight line that you will meet, as shown in Steps 3 and 4.

c. Continue this construction drawing straight lines spiralling inwards, marking the distance d along the next straight line that you will meet and working your way towards the centre of the pattern.