Half a Million Game 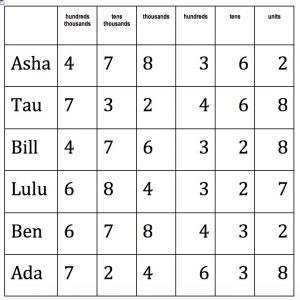 Each player has six boxes in which to write the digits as they are called out and can’t change their positions once they have been written down.

The teacher or group leader picks cards one at a time and calls out the number then puts that card aside. Altogether six different digits are drawn in random order. The players write the numbers in the boxes as they are read out trying to finish with a number as close to half a million as possible.

Which of the six learners won that round?

Which pair of learners got a combined total closest to one million?

Play this game with your whole class or with a group of learners. In each round a player scores a point of they get the total closest to half a million or if their combined total with their partner is closest to one million.